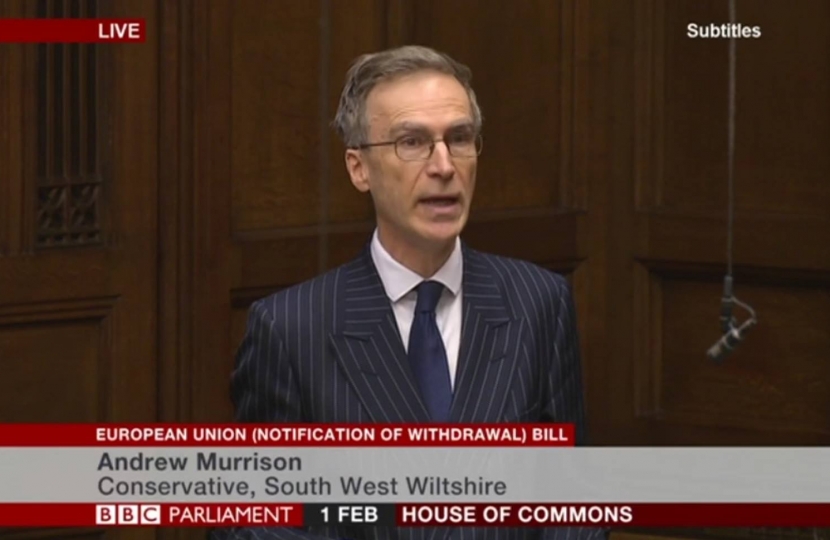 In today's debate on the triggering of Article 50, Andrew spoke of the importance of global trade and military co-operation after Britain's withdrawal from the European Union.

"It is a great pleasure to follow the hon. Member for Hampstead and Kilburn (Tulip Siddiq), who expressed herself with clarity and passion, and though I will not be in the Lobby with her this evening, I very much share many of the sentiments she has expressed.

"In 1519, Hernán Cortés arrived in the new world, and the first thing he did was to burn the ships that had brought him there. Pointing up the beach, he told his astonished crew that since retreat to Europe was no longer an option, the only way forward was up the beach, to the opportunities he saw in the new world. Britain now stands on the brink of its Cortés moment. When article 50 is triggered, there will be no way back. Brexit Britain must of course broker the best possible deal it can with the EU, but our future long term will depend just as much on our ability to operate freely and globally.

"Meanwhile in Europe, Mr Tusk this week told us that “assertive and spectacular steps” were needed to 'revive the aspiration to raise European integration to the next level'.

"Whose aspirations? They are plainly not those of the British public. Mr Tusk, however, has done moderates like me—people who admit the risks as well as the benefits from Brexit—a real service. His remarkable candour and his false prescription have explained more eloquently than I ever could why it was that the British public voted to leave on 23 June.

"We have had some truly excellent contributions today and yesterday, and I pay tribute to hon. Members who have expressed their positions forthrightly, even if I disagree with them. This is the House at its very best. This is the House listening to the public we serve.

"Last week, the permanent secretary at the Ministry of Defence, in an interview for the engagingly titled Civil Service Weekly, said that the EU was “operationally irrelevant” to defence and security. He was wrong. The EU is relevant to our defence and security. I am fully supportive of the Petersberg tasks—the use of assets for humanitarian and peacekeeping operations—under the EU’s common security and defence policy. I admire Operation Atalanta, which is run from our own fleet headquarters at Northwood, and I accept that the European Defence Agency, a body whose budget I tried to contain as a Minister, runs a number of projects from which Britain benefits. My point is that we must seek to engage with Europe post-Brexit wherever it is expedient to do so. I urge Ministers, representing as they do Europe’s principal military and naval power, to continue engaging, in particular, on the CSDP whenever that is to our mutual benefit.

"Yesterday, TheCityUK reversed its previously held Euroscepticism and announced that in its view the EU was a “straitjacket” and that Brexit presented “an unprecedented opportunity”. I agree absolutely. It spoke ​of achieving a global Brexit. That reminds us that in all those years, the only trade deals concluded by the EU were with South Korea, Mexico and South Africa. Britain pooled its ability to do deals with the EU in the mistaken belief that Brussels would undertake the task on its behalf. Clearly, it was asleep on watch. Now is the time for Britain to rediscover its historical engagement with global markets, and I hope that in the years ahead Ministers will do just that. We have seen the bizarre spectacle of Germany making more money from exporting coffee than the developing countries that grow coffee."