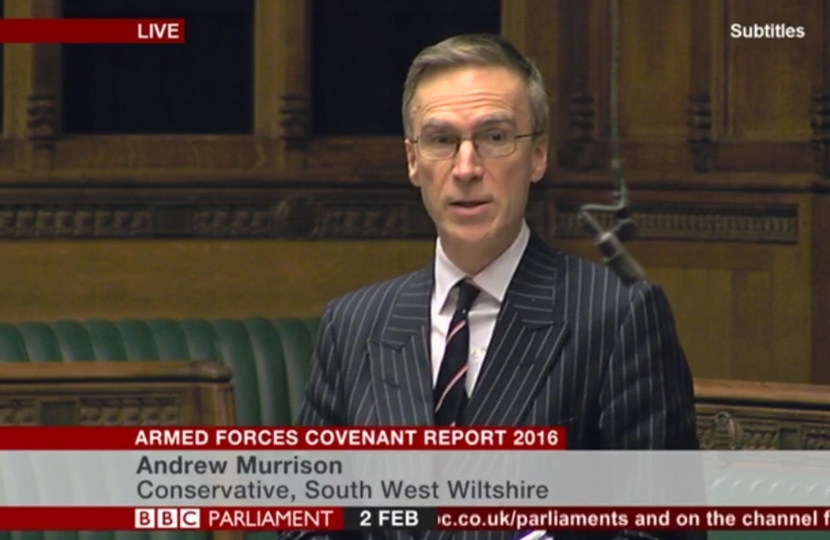 This evening, Andrew spoke in the backbench debate on the Armed Forces Covenant 2016 and raised concerns over recent figures which show that the strength of regular and reserve forces are on the decline.

"It is a great pleasure to follow the hon. Member for Motherwell and Wishaw (Marion Fellows). May I congratulate my hon. Friend the Member for Berwick-upon-Tweed (Mrs Trevelyan) on securing this debate and on the manner in which she presented it? Her work does her very great credit, particularly that in relation to the Public Accounts Committee.

"I also thank my hon. Friend the Member for North Wiltshire (Mr Gray) for giving us a wonderful plug and for promoting my book, which is available from all good booksellers. In a similar spirit, may I thank him for all his hard work on the armed forces parliamentary scheme—he has done a great job rejuvenating it and giving it a new lease of life—and for his work as chair of the all-party group for armed forces?

"It seems like the covenant has been around for a long time, because, semantically, it has biblical or mid-17th century connotations, but the truth is that it was really only invented in 2000 in a staff paper. In 2007, the then Leader of the Opposition decided that it would be a good idea to create a Military Covenant Commission and appointed Frederick Forsyth as its chairman. People such as Simon Weston served with great distinction on that commission. It informed the thinking of the then Opposition and subsequent Government, and resulted in the inclusion of the military covenant in the Armed Forces Act 2011. That pretty much brings us to where we are today.

"This report contains some great news. I give credit to the Government for their hard work and commitment, and I particularly thank my hon. and gallant Friend the Minister, who approaches this work with dedication and enthusiasm. There are a lot of positive things in the report. I was particularly taken by the fact that 73,000 ​pupils benefit from the pupil premium, which I feel strongly about as many of my young constituents benefit from it. Some 9,000 personnel are accessing the forces Help to Buy scheme, so that is having a real impact on people. The innovation is entirely compatible with the modern way of living for young people and has much to commend it, notwithstanding the points raised, quite rightly, by my hon. Friend the Member for Canterbury (Sir Julian Brazier) about the future accommodation model. I share many of those concerns. I could see that the Minister was listening attentively, and I am sure that he will go away and reflect on my hon. Friend’s insightful remarks.

"Having been ever so nice about the Government, I would just like to reduce my diminishing prospects of preferment by pointing out that we have recently had some fairly bad news about the recruitment and retention figures for regulars and reserves. I am particularly worried about the Army. The figures are really very bad. Of all the surveys we do, this one matters most. People are not daft. They pick up on what is going on around them and vote with their feet. We are at a time of reasonably good, robust employment and people have other options, so we have to work twice as hard as ever to keep people and, much more importantly, to retain them.

"The figures would have been even worse had we not changed the way in which we count people. We have now included phase 2 trainees in our trained strength. The logic behind that is perfectly sound in that phase 2 trainees can be used in the UK to do all sorts of exciting things do to with resilience and all the rest of it. Nevertheless, one is left—being a cynical politician—with the sense that this is, in fact, improving the figures. We have to compare like with like, but if we do that, we end up in an even more unhappy place—[Interruption.] I have been reminded that, of course, we are talking about phase 1 trainees: people who have completed phase 1, but not yet embarked on or completed phase 2.

"The new employment model, the new recommendations for the service families accommodation and the future accommodation model have been discussed at length. I cannot expand on that in the time available, but I entirely agree with some of the concerns expressed by my hon. Friend the Member for Canterbury. What has been proposed is exciting and forward-looking. It kind of taps into the way society is today. We always have to do that when trying to work out how the covenant will work into the future. However, it seems that this will disadvantage people and remove something valuable in service life. We must be very careful about that.

"I am concerned about mental health in the armed forces. I wrote a report a little while ago called “Fighting Fit: a mental health plan for servicemen and veterans”, ​which the Government, to their great credit, implemented pretty much in full, but what I missed was the level of alcohol abuse in the armed forces. Some would say that that is up to the individual and has nothing to do with combat. I would say that the culture in our armed forces—I have seen this over many years—is one of encouraging the abuse of alcohol. We have a duty under the covenant to ensure that we deal with this, but I fear that we are not doing so at the moment. Some 65% of our military are at higher risk for their excess drinking.

"I suspect that the advent of lawfare will be discussed at length by one of my hon. Friends in a moment. However, I would like to weigh in, because the issue has already been mentioned by my right hon. Friend the Member for Lagan Valley (Sir Jeffrey M. Donaldson), and I agree with his remarks. I am deeply concerned about this issue. I wrote to the Prime Minister in October and received a very satisfactory response, in which she made it clear that she takes this matter extremely seriously. I am pleased to note that we have an intention to derogate from the European convention on human rights in respect of future conflicts. Of course, had we done so several years ago, we would not be running into some of the difficulties that have been alluded to this afternoon.

"The Iraq Historic Allegations Team must conclude its work by the end of 2019. I am pleased that the Government have committed to making sure that that happens, in so far as they are able to do so. I am also pleased that they will be giving support to those veterans who find themselves having their collar felt; it is entirely appropriate that we should do that. Will that also apply to Northern Ireland veterans—Operation Banner veterans —who have been issued with letters from the Ministry of Defence inviting them to unburden themselves? Many of these gentlemen are in their 60s or 70s, and it is a troubling experience for them. My advice to them, quite frankly, would be, “If you receive one of these, you should seek the advice of a solicitor.” It would be nice to know that the MOD agrees with that advice and that it will undertake to fund it.

"Finally, I would like to give my observations on accommodation in relation to CarillionAmey. My sense is that, in recent months, things have improved. As somebody who represents a garrison town, I of course ​get correspondence on this issue regularly from my military constituents, and it has tailed off recently. However, there is no denying the conclusion in the extremely good report from the Public Accounts Committee, to which my hon. Friend the Member for Berwick-upon-Tweed contributed, that the 'performance of CarillionAmey has been totally unacceptable and it is right that the Department is considering terminating the contract.'

"Those are strong words from a highly respected Committee of this House, and I would be interested to hear what the Minister is doing to rein in the worst excesses of a company that, frankly, has let the men and women of our armed forces and their families down."