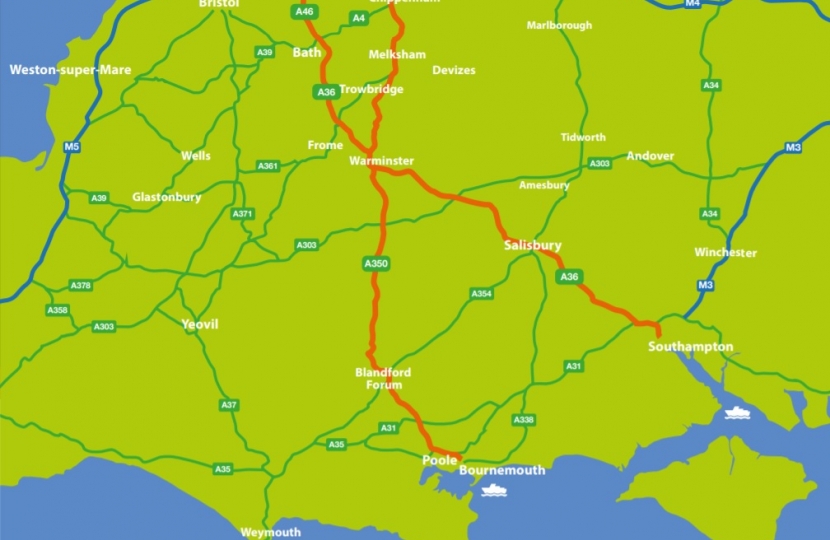 Tomorrow morning Andrew will be meeting with a delegation from Wiltshire, BaNES, and Dorset Councils to discuss proposals for better road connectivity across the South.

The local authorities covering Bath and North East Somerset, Dorset, and Wiltshire have collaborated with the Local Enterprise Partnerships within these regions to present the case for inclusion of the South of England within the Government’s road investment strategy (RIS2). RIS2 outlines new routes for increasing road connectivity in order to reduce congestion and improve road safety and the reliability of vital routes for residents and businesses across England. The Southern aspect of RIS2, with Warminster at its intersection, would aim to reduce congestion on the A350 at peak times and improve the safety of both the A36 and A46.

Andrew will be meeting with the respective local authorities in Westminster tomorrow morning in order to be updated on the proposal, which has now received the support of Highways England, and will continue to support improvements to the A350 and A36 so long as benefit the residents by whom they pass.

Andrew commented ahead of the meeting: ‘The inclusion of the South in the Government’s road investment strategy, and its proposal for better north-south connectivity between the M4 and Poole, is a great idea but only if it doesn’t result in more traffic through Westbury and Yarnbrook’

The prospectus for inclusion of South England in RIS2 can be found at http://www.bathnes.gov.uk/sites/default/files/connectivity_prospectus_single_page_version.pdf