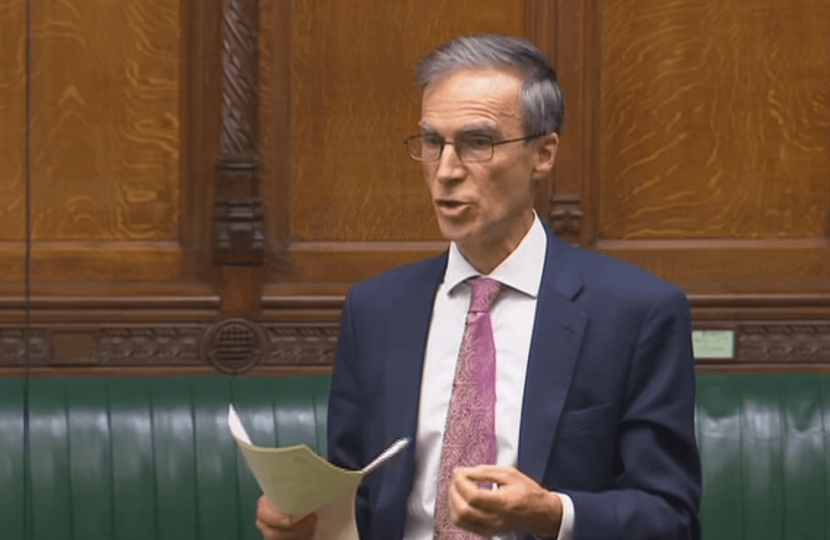 Having resigned from the Court of the University of Bath in August in response to figures revealing that Bath's Vice Chancellor was the highest paid (£451,000) in the UK, Andrew called for a Commons debate on the wider issue of vice chancellors' pay.

During the debate which took place this evening, Andrew said:

It is a pleasure to have the opportunity to introduce this Adjournment debate and to have two hours and 20 minutes in which to discuss this important matter.

I would like to set out a bit of the context around my request for this debate. During the summer, a league table of vice-chancellors’ pay was published, showing that the average pay of a university vice-chancellor was somewhere in the region of £280,000 a year. That struck me as a large sum of money, particularly in the current atmosphere of relative austerity. I was particularly upset to notice that the vice-chancellor of my own local university, the University of Bath, a non-Russell Group middle-ranking university, should be right at the top of that league table, in poll position at No. 1, on £451,000 a year, plus a very generous package.

Since being elected in 2001, I have been an ex officio member of Bath University’s court. I confess that it does not involve me in a great deal of hard work, but nevertheless I have been very pleased to be associated with Bath University, which—let me be absolutely clear—is a good institute of higher education that has done exceptionally well over the past several years. However, it seemed to me that I could no longer be part of the governance of Bath university, in however much a titular capacity, while its remuneration committee showed such an error of judgment as displayed on this occasion, hence my action over the summer.

Since then, I have been inundated with correspondence from all sorts of people—not only constituents, but young people who are burdened with debt, and university lecturers, particularly those working at the University of Bath—in support of the action I took, and in some cases providing me with very long accounts about why it was right that we should look at restraining this part of public sector expenditure. I found those arguments to be compelling.

I very much welcome recent Government interventions on higher education funding, as announced by the Prime Minister recently in Manchester and reiterated by the Minister in his statement earlier today. They are absolutely right, and will have given a great deal of comfort to those going through higher education, as well as to universities themselves. As the Minister rightly pointed out earlier, the quality of British higher education is of vital importance, and the changes made—to be fair, by the Labour party when in government, and then continued by the coalition and then Conservative Governments—were necessary to safeguard the quality of British universities and higher education in the UK. They are to be wholly welcomed and are absolutely right, but we do need to address the fundamental issue of student debt, which is causing so much grief to young people and, by extension, to the party of government. I hope that in the review the Minister alluded to earlier today we can find a solution that goes some way towards satisfying the concerns of young people in this respect and of course their families, who are usually co-contributors to higher education costs.​

Mounting student debt is one of the problems of our time. Currently, young people are leaving university with an average debt of £42,000. Although, theoretically, that debt may never be repaid, and in lots of cases never will be, it is a burden that young people feel acutely. The Minister understands that and is doing what he can to look at that issue. I wish him well in his quest.

This is not simply about tuition fees; it is also about housing costs and the high rates that young people have to pay for university-related accommodation, which is often of an inferior or distinctly mediocre standard. It seems to me that that is sometimes a covert way of universities raising yet more money.

Given that universities are relatively well off, I think we all would agree that they need to be particularly careful about spending money. That comes to the crux of what I want to discuss. This debate is at a time of relative restraint in pay across the public and quasi-public sectors. We have seen, as Members of Parliament, the results of that, with the concerns expressed in our mailbags and the bow wave of pressure to relax restraint that has been in place for some years now. People see that and examples of where it has not applied, and they make adverse comparisons. When people see very high pay leaping up and up, they are entitled to feel aggrieved, particularly when they feel they have some direct involvement in paying for what they see as excess. That certainly is the case here, as my mailbag has demonstrated.

In the past five years, vice-chancellors’ pay has increased by 17.4%. It now averages £278,000 a year. At Bath, it is £451,000 a year. By comparison, the chief executive of the Royal United Hospitals Bath NHS Foundation Trust receives £185,000 a year, which most people would think is pretty good. He runs an organisation that is just as complex as, if not more so than, the University of Bath; the university employs 4,800 people against the Royal United’s 3,015.