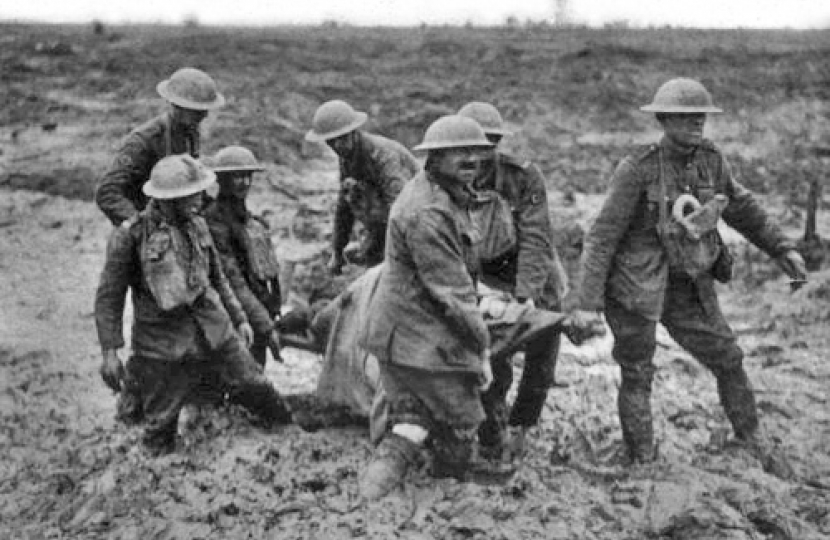 As the Prime Minister's Special Representative for the Centenary of the Great War, it was a privilege to speak in today's debate on the Third Battle of Ypres, a fight which came to epitomise the misery of trench warfare. Andrew said:

'In debates of this sort, we have a tradition of fine oratory and thoughtful contributions, which we have certainly had today. I was interested in the intervention of the hon. Member for Barrow and Furness (John Woodcock); he rightly raised the issue of tone, which was the first question considered at the very beginning of this commemorative period, when the Government were drawing up their plans for the four-year centenary, because really on that hinges all the rest. Commemoration and celebration are phonetically very similar, but semantically they are very different indeed, and throughout this period the Government have rightly insisted that this is commemoration, most certainly not celebration.

Earlier in this commemorative period, we had to address issues such as whether this was a just war in Augustinian terms. Was it the right thing to do, and was it worth the price? Those are two very different things.

In Augustinian terms, it was a just war. It satisfied all the preconditions for a just war, and it is as well that it was a war that was won. But who among us would have signed up to such a thing if we had known in advance what the dreadful cost of the war would have been? We are reminded of that cost every day as we arrive here, when we look at our own war memorial at the end of Westminster Hall. That is replicated right across the country in our war memorials, which characterise every single settlement in the British Isles. It was a cost, indeed, and one that I suspect few of us today would be prepared to countenance.

The third battle of Ypres became known as Passchendaele. The word evokes such powerful sentiment, despite the fact that it was the part of the campaign that was right at the very tail end of the engagement. The battle began relatively well. It was preceded by Messines, of which we were reminded last week as we commemorated the death of a former Member of Parliament, Major Willie Redmond, who died at 56—think of that—at that particular battle. He was a truly great man, and his death reminds us of the great waste of life and lost opportunity.

In the Minister’s excellent opening speech, he rightly mentioned Francis Ledwidge, the so-called poet of the blackbirds, and Hedd Wyn, the bard of the black chair, who died at Pilckem Ridge. The hon. Member for Cardiff West (Kevin Brennan), who spoke from the Opposition Front Bench, was quite right to point out ​that this cultural loss of wonderful creative men really brings home what a wasteful period in our history this war was. Just think of what the world might have been had those men lived to become fathers, grandfathers, doctors, poets and artists—to achieve their full potential. It is almost unimaginable. Yet, that is where we are left as a result of this terrible war. According to A.J.P. Taylor, third Ypres was “the blindest slaughter of a blind war.”'

To read the speech in full, visit: http://bit.ly/2ADhR7W