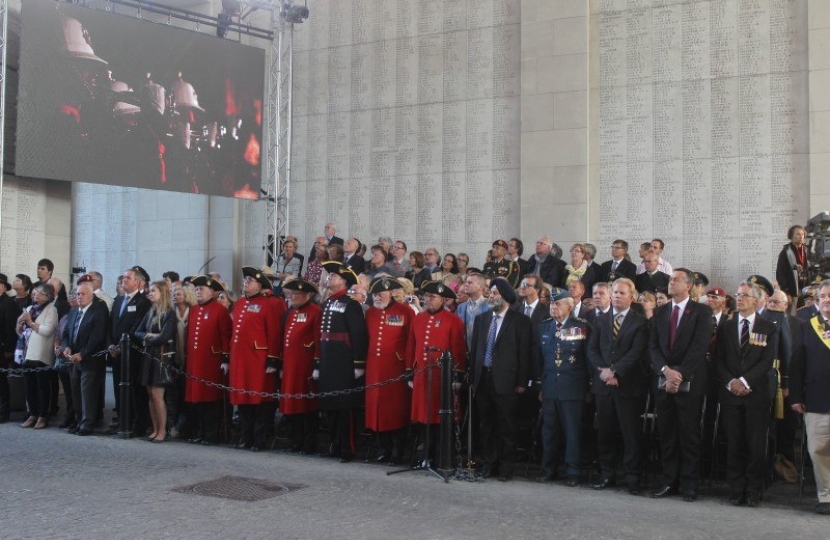 On Thursday I was privileged to be at the 30,000th sounding of the Last Post at the Menin Gate in Ypres, representing David Cameron. It was gloriously well done and a fitting tribute echoed from Canberra to London, Hillsborough, Cardiff and Edinburgh.

It's possible the EU In/Out referendum may come sooner rather than later. Whenever it arrives, it's vital that the terms of engagement are seen as fair and on the level otherwise the losing side will cry foul and it will lack legitimacy if the result is close. I've been having some conversations along these lines with colleagues.

The lesson of the Scottish referendum is that it pays to be positive. The danger for Eurosceptics is that 'out' like 'no' projects negativity. Far better, I would have thought, to focus on a bright alternative to EU membership if you can find or assemble one and almost ignore the necessary precondition of Brexit. This might mean, for example, the adaption of an existing treaty organisation as a vehicle for achieving the sort of equitable trading relationship with our neighbours that most in the UK are seeking.

I'm sure David Cameron's team will be able to make progress in its negotiations with Brussels and hope it comes back with a prospectus that people like me can recommend to our constituents.

Meanwhile, the Greek tragedy lumbers on. I've been adjusting my views on culpability. It is certainly true that Greeks have been complicit in the ludicrously inappropriate shoehorning of their pathetic economy into the European political construct. However, the real villains are the vainglorious state builders of Brussels whose headlong pursuit of their greater European project ranked the financial welfare of Europeans behind the Ode to Joy singing, starry banner waving ideal of Ever Closer Union. What's happening in Greece now, and may yet happen to the remaining Mediterranean weakling economies, must have been foreseen by these clever people. Shame on them.

Who then should pay? Well, not us. Mercifully, we're not in the Eurozone and this is a Eurozone shout. Since the architects of Ever Closer Union are chiefly French and German and since the economies of those countries have been the chief beneficiaries of the Euro my question is largely rhetorical.

Ironically, the monstrous hubris of the architects of the EU may result not in European unity but disintegration. If the economies of Spain and Italy go the way of Greece, look for a cut and run operation by the rich bits with functioning economies. Remember Italy is a relatively recent polity with prosperity concentrated in distinctive cities and regions in the north. Catalonia is already writing out to opinion formers across Europe pressing its case for independence from an ailing mother country whose chief export at the moment appear to be its skilled and well educated young workforce. The material I received in the post recently from Barcelona was nicely and expensively done.